- June 10, 2019
Flux has ended up on the back burner, albeit unintentionally. I've found the rhythm I'd hit slowly losing momentum to the point where I was working on it because I felt obligated to, rather than because I wanted to. This led to things being rushed, focusing purely on getting it finished rather than enjoying the process. I decided to step back from it and not touch it until I actually wanted to, rather than feeling I had to. So far I've not felt the desire to do so. I will eventually, but for now other pastimes have taken my focus.

As always, I'm constantly looking for ways to take something I enjoy and turn it into a living, or at least make some extra money on the side of the day job. Although I'd always intended to do some standalone pieces of artwork, I'd never really thought to what end. I few weeks ago I attended the Yorkshire Cosplay Con with my partner Gen, where we proceeded to purchase a fair collection of artwork from the many artist stalls. Adding to the artwork we picked up at London Comic Con at the end of last year, the intent to frame and hang it all around the house. I'd been in a bit of a lull and hadn't attempted to draw anything for weeks, maybe even months, but meeting and chatting with the artists (at no point did I mention I was starting out myself #introvertlife) and admiring their work, I left the Con feeling incredibly inspired to start drawing again.
I wasn't quite ready to resume work on Flux, it requiring more writing than illustrating, but I wondered if I had what it took to do what these artists at the con were doing.

I've decided to spend the next year just drawing with no real end goal, and build a portfolio. Then by the time the next Yorkshire Cosplay Con comes around I will see what I have and consider taking a stall myself.

I have a ton of ideas in my head, original characters from the D&D campaign I run, fan art for Critical Role etc, as well as some general fantasy and Sci Fi pieces, maybe even some pure filth cos who doesn't like smut.

I've just finished my first piece of an unnamed Elven Druid which I'm very pleased with and has helped set me on the style path I'll be going down. So until I have a more loaded portfolio, here's what is hopefully the first of many. 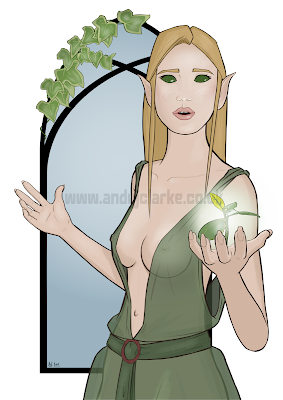